Blockchain technology is rapidly gaining traction with its decentralized nature. It can fuel new opportunities and benefit businesses through greater transparency, increased security, and easier traceability. Capitalizing on its powerfully calls for integration, however. Meaning that it should be integrated seamlessly with other back-end legacy systems to facilitate better outcomes. Adeptia’s reimagined integration approach can help companies harvest blockchain technology to improve ease of doing business and become more agile, collaborative, and secure.

What is Blockchain Technology?

Blockchain is a protocol and ledger for building an immutable historical record of transactions. The ledgers are concurrently stored in multiple locations, and the entries are cryptographically signed to prevent changes. An auditable trail of all the transactions is maintained, removing the need for a trusted middleman. A blockchain can provide secure, accessible digital versions to all parties in a transaction, and smart contracts can be used to manage the workflow of approvals and automatically transfer payment upon all signatures being collected.

Blockchain allows different parties that do not know or trust each other to maintain consensus as to the state of changes made to a shared ledger. Bitcoin is probably the most recognized use of Blockchain technology as it has enabled payment transactions between strangers without need for a third-party financial intermediary (that is, a bank). The scope of potential applications is broad and applies to almost every industry, giving rise to wide interest and investment in blockchain technology integration over the past few years. 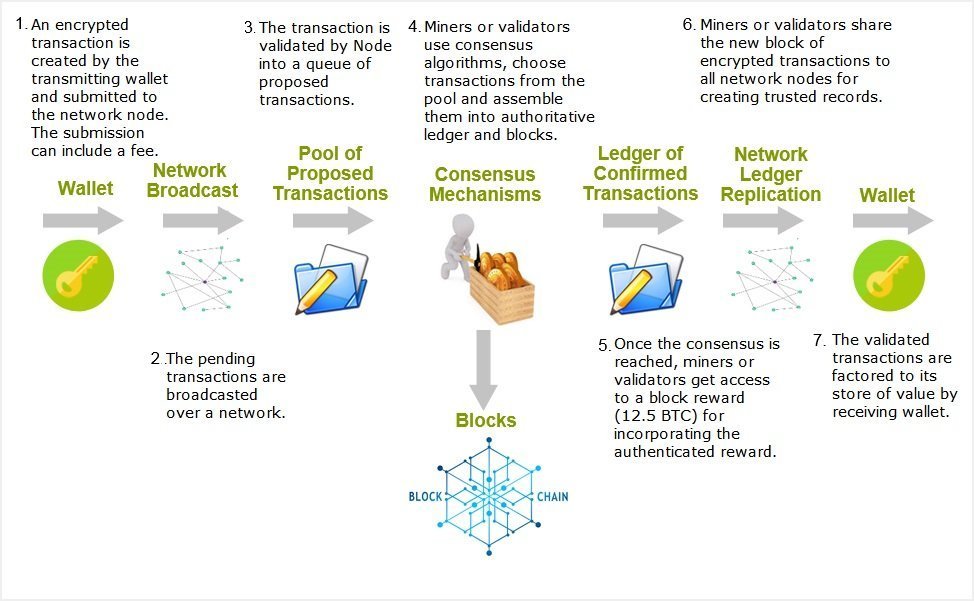 What Are the Building Blocks of Blockchain Application Integration?

At its core, any proposed enterprise blockchain architecture solution has the following key components-

Shared Ledger– Append-only the distributed transaction record. While the intended design of Bitcoin blockchain was to democratize visibility, in an enterprise blockchain this would have to be reconsidered due to regulations surrounding consumer data. As the information in the block once verified is copied to every node, there is absolute transparency with access based on permission.

Public and Private–Public blockchains such as Bitcoin and Ethereum are permission-less available for use. Any node can conduct transactions as well as take part in the consensus process to advance the blockchain.

The private (permissioned) blockchains operated by an organization or consortium. Its access is only to trusted users who have been granted permission to use the blockchain technology by its proof. The transactions In private blockchain are faster compared to Public Blockchains as it does not need a large network of hashing (miners) and heavy computation.

There are trade-offs between permissioned and public systems including transaction processing rate, cost, censorship, and the flexibility in changing and optimizing the network rules.

Cryptography– Ensures authentication and verifiable transactions. Each new block contains a cryptographic hash of the previous block and makes it hard to break by an adversarial process in the distributed system.

Immutability, Irreversibility– Records in the nodes are cryptographically secured, with no possibility for anyone (without key access) to change the data, so there is no threat to data integrity.

Trust Systems or Consensus– The consensus protocol is designed to maintain a common, unambiguous ordering of transactions and blocks and guarantees the integrity and consistency of the blockchain across geographically distributed nodes. State of consensus is reached when all nodes produce the same output and the outputs produced by the nodes are valid according to the rules of the protocol.

Business Rules or Contracts– This is a rules component, as needed by any business to define the flow of value and state of a transaction.

What is Its Reference Architecture?

An important success factor for blockchains in enterprise architecture is middleware. They need to be integratedwith each other and severalother systems, communication protocols, and technologiesin real-time. 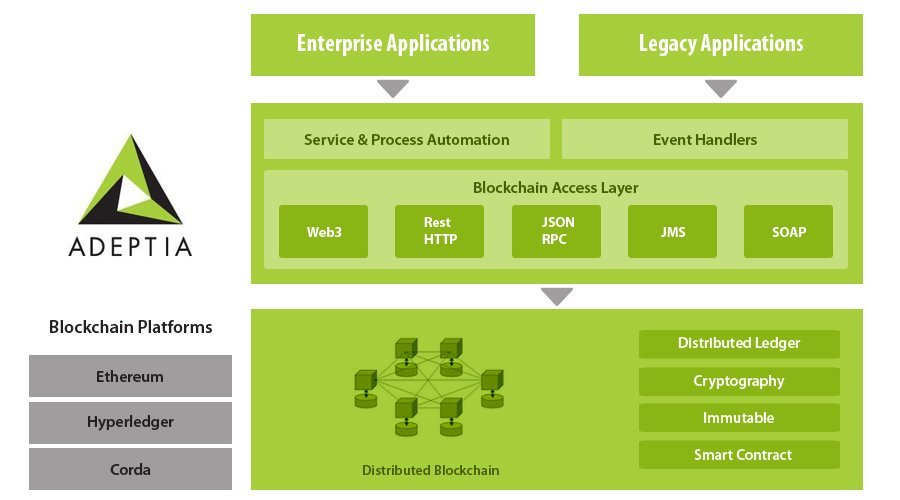 Different Implementations—for example, Hyperledger and Ethereum—cannot integrate easily and can be thought of as completely different enterprise systems. To share information between these two systems, you would need to create a blockchain integration layer or standardize on a single protocol. Enterprise blockchain implementation needs to be augmented with capabilities as depicted in the diagram.

A blockchain proxy layer is introduced to create a level of abstraction between the underlying core blockchain technology stack and integrated applications or services. When communicating via this layer, all blockchains look the same, reducing the level of dependency on the selected technology and allowing for decoupled solution architectures. In addition, it reduces the burden on IT, thereby placing them on a governance role, and ultimately improving productivity. Note that given the state of today’s blockchain technology stacks, it can be difficult to achieve a completely generic proxy layer as capabilities and approaches often vary greatly between solutions. However, the use of system-level micro-services that bundle commonly used features embedded in blockchain architecture can facilitate the creation of such a proxy layer.

To enable existing applications to work with enterprise blockchain architecture seamlessly, an access layer is needed –

2) To interface with functionalities of the blockchain application and communicate them to legacy applications.

3) To have complete real-time visibility of every event in the blockchain network.

4) To allow blockchain events to start processes across off-chain and on-chain applications.

5) To provide secure governance and risk mitigation of the blockchain network.

Blockchain applications are going far beyond their first application domains in virtual currencies, enabling not only the execution of simple transactions but also the carrying out of computation on a network, where e.g., payments become conditional on the state of some internal or external variables whoseexecution does not require any human intervention.

Smart contracts—self-executing code on a blockchain that automatically implements the terms of an agreement between parties—are a critical step forward, streamlining processes that are currently spread across multiple databases and legacy systems. Instead of static data objects that are inserted into the distributed ledger, a Smart Contract is a program that can perform the generation of downstream actions when appropriate conditions are met. They only become immutable once accepted into the ledger. Business rules are embedded in a contract that can automatically trigger based on certain conditions being met. For example, a credit pre-qualification or assets transferred after payment is made or after legal approval is provided etc.

They are not contracts in the legal sense, but components of the software that extend blockchains’ utility from simply keeping a record of financial transaction entries to automatically implementing terms of multiparty agreements. Smart contracts are executed by a network of nodes using consensus protocols and once deployed on the blockchain, the smart contract is always running and responding to requests. Essentially this lowers the need for third-party oversight because the software itself is a controlled and open framework visible to all transaction participants allowing parties to agree upon terms, with reduced risk of error or manipulation.

Related Search: How Blockchains are used in Banking and the Financial Sector

Before the rise of blockchain integration technology, executing this type of smart contract was cumbersome because parties to an agreement of this sort would maintain separate databases.

Enterprise business services and process automation (such as workflow or case management) capabilities will access the blockchain layer for establishing a business network—or for incorporating other blockchain-related capabilities into defined business logic.

Event handlers are components configured to listen for changes to the blockchain or the connected endpoints and to automatically invoke appropriate enterprise logic in response to these changes. Event handlers typically work in conjunction with the blockchain APIs and data distribution transport and may be bundled or created as micro-services within the enterprise architecture.

Organizations need to consider which business transactions will be part of the blockchain, and know-how to define them. Adeptia helps clients capture the opportunities offered by blockchain by identifying viable, feasible, and desirable use cases; recognizing industry business processes where blockchain technology is applicable; building and integrating blockchain ERP technology solutions. In short, Adeptia’s blockchain integration solution helps companies transform the way they do business, grabbing a larger market share and consequently gaining a competitive edge

Blockchain integration solutions will result in a substantial change in the way applications are developed and deployed. It is important that Blockchain technology is able to connect to various mainstream application system like ERP, CRM, etc allowing customers to achieve business success. However, as previously discussed, a blockchain is not always the answer. Various factors must be taken into account to determine if it is appropriate.

From an IT perspective, blockchain is an important part of the enterprise’s core, so it should be integrated with other back-end legacy systems for better outcomes. The role of modern data integration solutions come into play here.

In the future, blockchain integration solutions from different companies or even industries will be able to communicate and share digital assets seamlessly.

For enterprises whose use cases upend on the blockchain, the potential benefits of integration are quite clear: More partnerships within an ecosystem that can drive more value and boost ROI.

How Data Integration Solutions Make Your Customers Happy and Satisfied